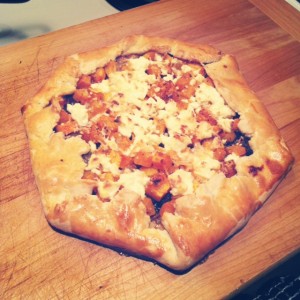 The thing I love most about galettes is that you can literally put anything inside of one and, because it’s wrapped up in a flaky pastry, it’s pretty much going to taste amazing.  In case you don’t know what a galette is, it’s basically a free form flat round-ish tart.  I’ve used different pastry recipes, but the one I love the most is the Tartine Flaky Tart Dough.  If you’re looking for something lighter, just use some puff pastry–it’s your body, your choice.  I use the Tartine Flaky Tart Dough for both savory and sweet galettes–the only difference is that with sweet ones, I’ll sprinkle sugar on top of the egg wash.

Dissolve salt in water in a small bowl.  Place bowl in freezer while you assemble the rest of the dough.  Put flour in a food processor and scatter butter on top.  Pulse until mixture resembles large crumbs and you can see pea-sized chunks of butter throughout.  Slowly feed cold water mixture through the feed tube till the mixture comes together in the bowl.  Don’t over mix or that ish won’t be flaky!  Turn out the dough onto a lightly floured surface, divide into two disks, wrap in plastic wrap and put in the fridge.  Don’t stack them one on top of the other cause they won’t get as cold (seems obvious, but I’ve definitely done this before and it sucks).  Chill at least an hour but the longer the better.  That was easy, wasn’t it?

Here are a few bad ass recipes I’ve done in the past that are delicious.  The basics are the same so I’ll get into it on the first recipe then just give ingredients for the others because I’m lazy.

Preheat your oven to 400 degrees.  Take your cubed up squash and put them in a big ass bowl with olive oil, salt and pepper.  Get your hands dirty for once and mix that ish up till everything is coated.  Spread them out on a parchment lined baking sheet or two and roast for 30 minutes.  I turn them over in the middle of roasting cause I’m that guy.

Meanwhile, heat up a couple tablespoons of olive oil with a tablespoon or so of butter in a skillet over medium heat.  Thinly slice your onions and drop them into the pan.  Salt and pepper those onions up and let them hang out for a while.  It’ll take about 20-30 minutes over a medium/medium low heat to properly caramelize the onions but it’s worth it.  About 20 minutes or so, I sprinkled in my rosemary on the onions and stirred those in.

By the time your squash is done, your onions should be about done.  This is where you need to pull out your pastry and start rolling it out!  On a lightly floured surface, roll out the pastry to about a 12 inch round.  Transfer the round to a parchment lined baking sheet and start assembling.  Sprinkle some Parmesan and ricotta on the bottom of the pastry leaving about and inch and a half border around the outside.  Next, spread the caramelized onion over that, then cover that with your squash.  Dollop your ricotta on top of the squash.  Fold the border over the filling, pleating the edge to make it fit.  The middle will be open.  Wash the pastry with the egg wash and bake for about 20-30 minutes.  Slice up and enjoy.

Heat oil and butter in a pan over medium high heat and add shrooms.  Saute until softened.  Lower heat to medium and add garlic, thyme and some salt and pepper.  Cook for about 2 minutes then set aside.  Roll out your pastry like you would any galette and put on a parchment lined baking sheet.  Cover bottom of the pastry with arugula then garlicky shrooms then grated fontina.  Crimp the edges of galette, shellac with egg wash and bake in oven for 20–30 minutes.  Holy shit that’s good.

Peel, core and thinly slice the apples.  Put in a bowl with zest so those suckers don’t get brown.  Combine the flour, sugar, salt, cinnamon, and allspice in the bowl of a food processor fitted with a steel blade.  Add the butter and pulse until the mixture is crumbly. Pour into a bowl and rub it with your fingers until it starts holding together.  Sprinkle half the mixture into the apples and mix.  Pile the apples in the middle of your rolled out pastry.  Sprinkle the remaining half of flour/cinnamon/butter mixture on top of the apples.  This will give it a dope ass crumbly topping.  Fold over galette, wash with egg wash, then sprinkle some extra sugar on top of the pastry.  Bake for 20-30 minutes.  Serve hot with ice cream or sweetened whipped cream.