In August, Shawn and I took a road trip to the Oregon Coast as we do every summer.  We typically drive up to the California/Oregon border, spend the night in a funky cottage or cabin, then continue our drive up north.  One the way back, however, we’ve sucked it up and driven the whole way back in one straight shot.  This drive consists of plenty of sunflower seeds, coffee, and mostly drive thrus to fuel us and give us enough energy to get back.  I’ve learned my lesson when it comes to fast food.  I was enticed by the word “premium” in the description of a Burger King “Premium Fish Sandwich” and got that once which was a huge mistake.  Now, I try and stick to things like grilled chicken sandos.  This year on the drive back, Shawn and I decided to reward ourselves with a dinner from a real restaurant instead of a drive thru.  We ended up in Fairfield, CA at a place called Evelyn’s Big Italian Pizzeria. 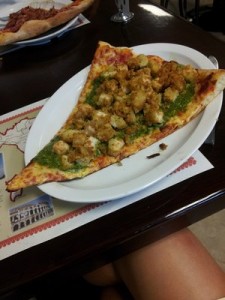 Picture of a slice of Soprano Pizza

The restaurant was a little confusing.  You have to wait in a line and order at the counter.  There are no menus at the beginning of the line so you kind of have to choose quickly when you get to the front.  We were greeted by a girl who was sitting down comfortably in a chair and who looked ready to go home for the night.  We were feeling a bit void of vegetables so we ordered a grilled chicken salad and a slice each. Shawn got pepperoni. I got something called The Soprano which was described as grilled chicken and pesto.  Both of our slices were cold with beads of oil on top of coagulated cheese.  My slice had cold chopped up chicken nuggets on top of flavorless pesto sauce which was on top of a cheese pizza.

The salad was also insane.  It came with two Hidden Valley Italian salad dressing packets on top of the salad–you know, the ones you would get in the cafeteria of your middle school.  Yeah.

As the final meal on our awesome road trip, it fucking sucked and we both felt sad about ending everything on a sour note (literally).  Our dinner was so bad that I decided that I had to write a Yelp review about it.  You can read it here (I am “Mimi M”).

Almost two months later, I got a message from someone named Sean W of Evelyn’s Pizzeria.  The message went like this:

Please stay in San Francisco.  They have all you need there.
We do not serve cold food that should be hot  Why would you say that?

I was a little shocked and bummed at the response so I decided to roam around their Yelp page for other reviews.  Was I mental and don’t have the culinary aptitude to understand that this place has the best pizza outside of Naples?!  Was my palette really that bad?  Nope.  This place is insane and here are some key points in their reviews:

Suddenly the owner, I believe Evelyn, screams at me saying I got to have a plate before I go down to eat or leave. “LEAVE MY BUILDING OR I’LL CALL THE COPS!”  He just kept barking at me, even calling me discriminatory names. He said he will never serve me again because I was being an ass. I go to the checkout lady and asked for a refund, and she said they don’t give them out, and she can’t do anything about it.  I leave, and thought about pressing charges for a while to the restaurant, but I guess I came to the realization that that would be paying too much for my whistle. I’ll let this go; but advise everyone not to go to this place simply for the fact that the owner went personal with me even when I spoke few words in the first place.  I don’t know if he had something against Asians or something, or he had a bad day; but that was very unprofessional and I wish for him to know that there are better ways to communicate that to other people.
[posted by Steven C]

Saw employee SMOKING… Yes I walked to bathroom with my 4 year old daughter and we walked passed the large man in the closet office smoking a cigarette. I WAS SO SHOCKED! It looked like this was his normal routine as he had a fancy ashtray and watched tv.
[posted by Ryenn B]

The chicken was this massive 4 person portion that was gross. It was overcooked and bland, and just tasted awful. A 99c banquet TV dinner would have had better quality meat. Their chicken was highly processed near-rotting crap.
[posted by Chris S]

One younger guy took out RAW chicken, diced it, threw it on the pan to cook. He proceeded to cut up lettuce with the same knife- without washing or rinsing the knife.
[posted by Kyndra G]

After I felt like I was totally in the right about my review, I wrote Sean back:

Despite what you may think, I don’t roam around Fairfield, CA looking for restaurants to bash on. I ate at your restaurant, I was disappointed, and I posted my experience on Yelp.

I also am very familiar with the definitions of “hot” food and “cold” food and have never been accused of getting the two definitions confused. Sorry to break it to you, but my pizza was cold.

I have written both positive and negative reviews on Yelp, but all reviews are truthful and not vengeful. Most of the negative reviews are followed up by the owner sending me a message apologizing for the experience and thanking me for the feedback. Till your message, I’ve never received any hostile feedback from owners or managers.

You may follow up this message with some short, snooty comment–I’m totally prepared for that so go for it. I feel totally content with my initial review and response to your comment, so I’m just gonna leave it at that.

So now it’s the waiting game.  Can’t wait to see what kind of response I get to my message.  I only wish there was a way to have the trail of messages be visible to all the world.